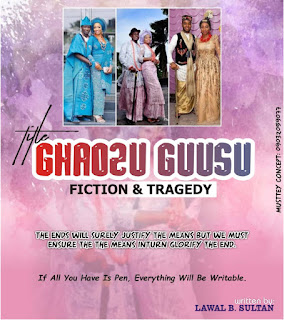 Episode 3
Soon I traveled to the newly seceded country which broke away from Gold castle. The move was one which ease the stress and made work move on better. Since the electricity over there is constant and their are lesser or no police harrasment. It affords me the opportunity to move away from family stress. I prefer to work there and only come home during festive period or occasions like christmas, easter, wedding, burial, etc.

As time goes on I continue to grow in the relm. Soon I started having all that any man of my age can ever crave for. Houses I can call mine, exotic cars, care for my parents, have all it takes to hold on to the woman of my dreams. Also keep side chicks for the raining days so an hustler will not have only his pillow as a companion on such days.

I got my deserved respect back family and relationship wise. All my senior sisters soon realize that a man is a cutlass and not a hoe. They couldn't conclude on any family issue without my input or presence. As the saying goes when a rich man speaks, a wretched fellow said he has got an idea. Has anyone ever taken idea to the market to purchase anything. A hobbyist interpretation of Ola_dips lyrics says "it's a rich person the world associates with. So if you want to communicate use money as your mouth piece." My relationship with her (Oritsebemigho) grew stronger. It must have been what Sir Mol has in mind when he said "....some relationship are sweet like swimming pool...." Love is indeed sweet but when money is involved it tends to be sweeter. The table turned quickly as I now call the shots. Since I'm now in possession of what a contemporary woman want, money, free money and more money.

Been the dedicated man that i am. It only took few years to make the Pathfinder's list of the richest young men. As at that time I had acquired hectres of land and I had ventured into lifestock business as well as other businesses in the country. But still i was based in Crystal empire and only come home once in a while.

Crystal Empire is a newly birthed nation. It broke away from a long existing colonial entity (Country) Gold Castle. The secession movement was after a staunch sectarian strive premised on marginalisation and segregation. The new entity have no concrete means of building up its economy. It soon became a banana republic. A place where anything goes so far the end can justify the means you adopted. Commercial s*x, drug trafficking, internet fraud and other social vices emerged as the only foundation the economy can grow on In the early days of struggle. The government had no choice than to adopt laissez-faire approach to all economic and financial activities including those shrouded in crime. The law was equivalent to a rod, you can surely bend it to have your way. You only become an offender when the rod gets broken in the process.

I got a call from my Alma mata. It was the present President of the department I graduated from. I'm busy Mr President I'll call you back I said. The Comrade said okay and I ended the call. When we later spoke in the day, the request was for me to grace the personality public lecture of the department student's association as the honouree. Been an alumni of the department. I'm honored by this invitation but presently am out of the country. Keep me updated on the date and time. In case there is any changes let me know early. So I can plan ahead as I know most students programs do suffer from keeping up with the initial date chosen due to one difficulty or the other.

Definition of term
Laissez-faire: laissez faire is an economic system in which transactions between private parties are free from any form of government intervention such as regulation, privileges, imperialism, tariffs and subsidies.